In the Osoblaha area, where the Hrubý Jeseník Mountains gradually descends to the fertile Silesian lowlands, one will find a narrow-gauge railway running from Třemešná ve Slezsku to Osoblaha.

The construction of this railway with a gauge of only 760 mm and a length of 20.218 km was started in the spring of 1898 and on 14th December of the same year, the first regular train was launched. Each day, three sets of trains with combination of freight and carriage passenger cars were running there. The railway was incorporated in the newly established ČSD in 1918.

Three tank stream engines of the U series (later renamed to U37.0), 4 passenger, 2 service and 7 freight four wheel cars were acquired to ensure operation. Special multi-wheel trailers were used to avoid transloading of cars with usual gauge.

The extension and rationalization of the operation were made possible by the supply of two four –wheel motor cars (M11.0) and one trail car made by Tatrovka in Kopřivnice in 1928.

In 1938, the railway track was captured by the German Reich Railways. They used eight-wheel carriage passenger and freight cars. Frame type multi-wheel trailers were delivered for transportion of the cars with usual gauge.

The liberation battles in March 1945 badly damaged the Osoblaha area. Nevertheless, the railway track was as if miraculously spared. Its car fleet was however in a desperate state. With the restoration of normality in the region, the operation of narrow-gauge railway also returned.

The vital change of the railway was associated with the purchase of new eight-wheel motor cars of the M21.0 series in 1948 and primarily, with the supply of eight-wheel diesel electric engines TU47.0 from ČKD Prague ten years later. The latter were renamed to 705.9 and are still in use. The Osoblaha railway track said goodbye to steam on 16 December 1960. The carriage passenger cars currently used were produced in Tatra Smíchov in 1966.

Fortunately, each time enough reasons were found to keep it running, and during the period of 1985 to 1989, the line underwent general repairs. Today the line and all equipment is in good condition, and ready for many more years of operation.

How to get there? 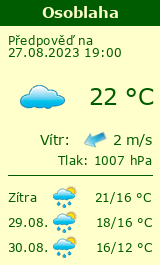